​"Trillium Olympia is one of the most robust Trillium Awakneing communities in the world, and celebrates the sovereignty and empowerment of the practitioner, while utilizing and honoring the gifts of the Teacher and the Teachings." 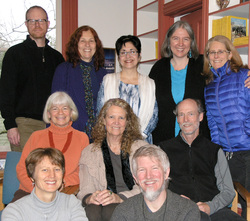 Olympia's Trillium community started with a small, eclectic group of friends who had been gathering regularly for a number of years to explore various forms of self-inquiry.

In the fall of 2011 some of us discovered what was then called Waking Down in Mutuality, and began reading associated books and essays, and attending sittings with teachers in the region.
Early in 2012 we started inviting teachers from Portland and Seattle to come to Olympia and hold occasional and very small sittings. By mid-year we also began to meet periodically on our own, as a peer circle, to practice mutuality. By the end of 2012 there were about seven of us and we were meeting roughly once per month either for a teacher-led sitting or a mutuality circle.

The work proved to be quite powerful and transformative, and by mid-2013 four of us had realized stabilized embodied consciousness awakenings! Inspired, we developed a regular schedule to support our work and brought in the NW teachers to be with us and further catalyze our evolution. 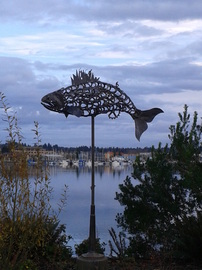 Over time, our circle doubled in size and we ramped up to two events per month: one teacher-led sitting and one mutuality circle. We also formed a Coordinating Circle to provide structure and support as we navigated our expanding group's needs.

In 2014, we began hosting weekend workshops which allowed deeper immersion in the work. These events were well-attended and many participants had wonderfully transformative experiences. By the end of the year several more of us had an awakening, and many others experienced subtle but significant shifts.

As of March 2021, we have over 30 active members in our vibrant mutuality circle community, and many of us enjoy stabilized whole-being realizations. Our community includes three Trillium teachers -- Margit Bantowsky,  Joanne Lee, and Kirstin Eventyr -- and two Trillium mentors, Debi Bailey. and Jim Hutcheon. We generally have one or two events per month: one monthly sitting, monthly small mutuality circles, and occasional intro nights and teacher-led workshops. See our Events Page for upcoming offerings.

Our Mutuality Circle community regularly welcomes new members. If you want to learn more about engaging with us, click here.
"Through trust, we find we can eventually BE ourselves, all of ourselves, from low to high, simple to complex, in every dimension.

We find we can survive and even transform into delicious divine food our darkest parts. Through trust we express, celebrate, and magnify our Divine and human natures."